Rei: I’m Rei with Fuel The Scene Magazine and this is my lovely assistant, Kristy, running camera stuff—

Rei: Would you all introduce yourselves to those who are not familiar with you?

Savannah: Yeah! Hi, I’m Savannah. I sing in The Heirs.

Brandon: Hi, I’m Brandon. I play guitar and I sing.

Brennan: Hi, I’m Brennon. I play the drums and electronics.

Eian: I’m Eian and I play bass and keys.

Alex: I’m Alex. I play guitar and sing some background vocals, and we are The Heirs from Los Angeles, California. 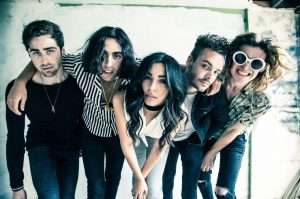 Rei: Wow, all the way from Cali! How is it being on the East coast?

Rei: Was it what you expected?

Brandon: I think I’ve never sweat this much.

Alex: I expect it in the south. The further north we get, I kind of hope it dies but I have a feeling that it’s not going to.

Rei: No. [laughs] You can try and prepare yourself as much as possible but it’s never going to be enough preparation for the actual heat.

Brandon: You can try, you can try but you never fully be prepared.

Rei: No no no. So how is the festival circuit going for you all?

Brandon: We’re having a blast. Making tons of friends. Meeting tons of new fans that are absolutely amazing and overall just having a great time.

Rei: And what are your plans post-Warped Tour?

Savannah: Hoping to just get off and write a ton of music. Maybe an album or an EP. To tour would be rad. To tour more. [laughs] Maybe some local shows around California. Just kind of whatever to keep the ball rolling. Keep our presence.

Brandon: Yeah, we’ve got a lot coming up. You can stay posted on our social media, TheHeirsMusic and our site, TheHeirsMusic.com.

Rei: What song is resonating the most with fans right now from your last set?

Savannah: I would say, I’d like to say our single. It’s called “what You Want.” It’s the third song in our set. I think we’re all just super pumped to play it. That kind of radiates to the audience members.

Brandon: It’s the newest in the set. We’re exuding a lot of fresh meat energy and people are picking up on that. What would you guys say?

Alex: I would say for the Warped Tour crowd, I’m actually going to go with what we have as the B-Side on our single. It’s called “Lungs”. That is more of like a rock anthem. It’s got low kind of droney verses. But when that chorus hits, it’s like quarter note, driving, just like in your face and very anthemic.

Brandon: Didn’t you say today everybody was like jamming out?

Alex: And that was one today we’re like we get the crowd hyped but today the crowd was just feeling it. Everyone was clapping along. It was cool.

Brandon: It was so sick.

Savannah: Actually we’re selling it exclusively on the Warped Tour so if you guys want to get it and then it’s going to be released after the Warped Tour, once we’re off.

Rei: Where can people get it right now?

Brandon: It all started on our last tour in the fall/winter. We were in Detroit and we were sitting

backstage before a show. Brandon and I were just searching through old rock and roll band pictures, looking at Nirvana In The Water, looking at INXS, Michael Jackson, Prince and then we were told that this song was hinting at being a single from our management team. We started to think of ideas for music videos and we kind of did some sketches. [points] He’s a great artist. We just kind of sketched out some cool scenes and then we all collaborated on the ideas and our outfits and it was a really team process which is really fun. Then we came into the video and just had a really really good time. We swam, we were underwater for all those underwater shots. We had a set that was built with these gEiant purple pink lights hanging up above us.

Brandon: So we had those lights above us and a lot of gold confetti, gold instruments, gold beds, gold everything and it felt cool to be in the universe that our song lives in sonically. To create the world that we saw it as and actually get to put that forward for people to see as well.

Rei: That’s awesome. Do you all get a lot of creative control as far as visually?

Savannah: Yeah. I would say we had 100% creative control when it came to the music video which was great.

Brandon: Yeah, I feel like a lot of everything we do is it starts with ideas. They come about from us realistically just bullshitting and talking about cool things and then it all kind of comes into play.

Brandon: Right? We come with a lot over this tour. Just talking about random things.

Alex: We have a lot of dumb ideas for like scripts of movies and just hanging out with other bands. Someone showed us a video of man running across a pool that was filled of custard and so we created this character called Howard Custard Pool. He’s a cigarette smoking astronaut. He’s a melancholy moon man.

Brandon: Yes, it’s called the Tragedy of a Melancholy Moon Man. Coming to theaters in 2030.

Eian: I didn’t know we started producing this movie.

Eian: I would definitely go watch that.

Brandon: And the movie’s just a bunch of short films blotched up together.

Alex: It’s all based around the comic book that we’re creating as well.

Brandon: That we still have to make as well.

Rei: A graphic novel, he means.

Rei: Awesome. What would you like to leave fans with, things that you wish that they knew about the Heirs? What things are coming up for you?

Brandon: We are on all the bands Warped Tour this summer. We’re having an absolute blast. Everybody come out, get your tickets to come see us. Tons of other amazing bands on here. Yeah, and we are posting a lot of new photos on TheHeirsMusic.com. We have a Tumblr linked up to that. A lot of new video content coming out soon. New music and all kinds of stuff. Just stay posted with us.

Brandon: Say hi to us. We don’t bite.

Savannah: …or maybe we do.