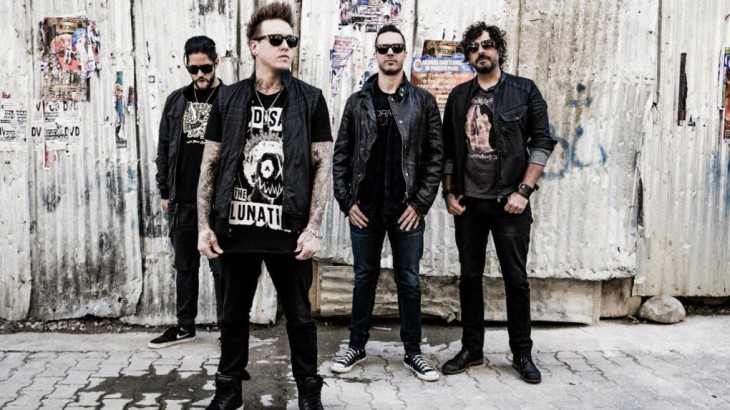 Rei Haycraft got a chance to hang out with Tobin Esperance of Papa Roach backstage before their Carolina Rebellion set and chat about their new album, “Crooked Teeth,” some of the best moments at live shows, and hot yoga.

Rei: And you are listening live on Crim Radio! We are here on day three, man. How has your festival been thus far?

Rei: Oh, perfect. There we go. First impressions of Carolina Rebellion. I love it. We also saw you guys last week at Welcome to Rockville and it was kick ass. I was down in the pit, you know, getting crowd surfers thrown towards my head.

Tobin: I saw a guy in a wheelchair! That was epic. It was like, perfect. It was like the sun was going down, we were playing this epic, long extended version of this song that we have and … I don’t remember which one it was, but I know it was epic. This guy comes over in a wheelchair and everyone’s cheering. I was like “Whoa, this is a trip.”

Rei: What’s the craziest thing besides that that you’ve seen happen while you’re onstage?

Tobin: I’ve actually seen a guy, I think in a wheelchair … You know back in the days, they would do like the trampoline, like the tarp-y type thing where they would … A bunch of people would extend it? Put people on it and flip them up in the air? I think I saw that. Well, a lot of people throw their limbs—not their actual limbs, but like prosthetics— they’ll just throw them on stage! Yeah, it’s weird. All kinds of weird. I’ve seen it all. I always see stuff go down. Stuff’s always going down when we play.

Rei: You see everything and you just pretend it’s not happening.

Tobin: Yeah, every body part, every kind of brawl you could imagine. Girl vs. guy, girls vs. girls. All that stuff. Yeah, you see a lot when you’re up there. You’re just like man, this is crazy.

Rei: Can you tell us about your touring plans this summer?

Tobin: We actually just got started, so last weekend was our first show in America playing new songs, all that stuff, since a long time ago. I think since 2015. I think we took the whole year off. Wait, what year is it? I don’t even know.

Tobin: Could be wrong.

Rei: What else do you have planned that fans can look forward to?

Tobin: I’ll tell you what we have planned. Crooked Teeth is what’s being planned. May 19th, Crooked Teeth. All kinds of new stuff’s going on. We’re going to be touring all over the world.

Rei: And you’ve got some exciting guests that came on for this album. Can you tell us a little bit about that?

Tobin: We did a song called “Periscope” and we invited this beautiful, wonderful, voice of an angel, her name is Skylar Gray, and we just shot a video for that as a matter of fact. That will be coming out soon.

Rei: When’s that dropping? Can you tell us?

Tobin: And we also have MGK on that track. I like that guy a lot. He’s good people. Great performer, made friends with him by performing with him on a … we collaborated on a song together live. He came up and did “Last Resort” with us at this AP awards show. We were just like, “yo”, playing him new demos, get a verse on this song that’s not finished yet and he was like “I’m on it”. So we did, and it was cool.

Rei: You all are great about collaborations and fostering that sense of community in the music industry. What is that like, being able to bring these other artists into the studio for a Papa Roach track?

Tobin: Well, it’s cool to kind of venture out and grab people that normally, they wouldn’t expect. On the last record, we collaborated with Maria, and I think people were like … They loved it, and she’s amazing. That kind of makes-

Rei: I got to see at Rockville, when she got up with you all. That was like …

Tobin: Yeah, that was like a high light of the whole show.

Tobin: For sure, and I think people would expect that kind of, and then on this one we were like … We had to do it a little bit different.

Tobin: We were like, let’s just grab some guys that you know, and some gals, that people wouldn’t expect.

Rei: That was an awesome moment, though. I was in the photo pit, and so we only did the first three songs and then they make us leave. And then we see Maria going up there, and you go be out there together and we’re like “Are you kidding? Now we’re not in the pit?”

Tobin: Another epic moment, brought to you by Papa Roach. We’re full of them.

Tobin: My first memory … The first memory? I mean, really, there’s so many. We’ve had such a blessed career, like, we’ve done so much crazy shit. Like I said, we’ve seen it all. It’s just like –

Rei: I can see the gears turning and you’re flashing through your life.

Tobin: I know, and they’re all rated different things. It’s like X-rated, R-rated, PG-13. Which story should I tell? Which version should I tell?

Tobin: No, but there’s a lot. Really, like, I mean even the days when nobody knew who we were and we were playing just shitty clubs and bars and dives, you know, all over the US. And being in a van. Those were like, some of the best years of my life, and then when we first came out and we started touring and making friends with bands like you know, Korn, and you know Bizkit and Eminem, and all that stuff that we used to do back in the day and you know, you’re playing arenas for the first time and you’re on awards shows and you’re doing things that you would never have imagined. To just having the longevity where we’re at now and just, yeah. It’s all pretty crazy. Playing shows in front of like, a half million people.

Rei: It’s insane to me. I can’t even imagine what it would feel like up there, like staring at all the faces that are … And they’re all singing along to these songs they’ve known their whole lives, you know?

Tobin: I don’t know. You ever done it?

Rei: No. I hear everybody talking about it though. So I’m like, maybe I should check this out. But then it sounds kind of miserable.

Tobin: No, it’s not. It feels so good. Like when you force yourself to just stretch and you release all these things. You’re sweating profusely and-

Rei: What am I releasing?

Tobin: You’re just like … well, you’re releasing a lot of sweat and toxins. You’re stretching. You know, you’re opening your body up, you know? And then you just like … you feel like this overwhelming thing when you’re done with it.

Rei: So is that what you do in between shows to release?

Tobin: I just had to throw something healthy in there, you know, because it’s like … You know, you talk about … if you’re gonna drink and do all that other shit, you gotta be healthy too.

Rei: You gotta balance it out if you’re gonna survive.

Rei: I love it. Do you have any words of wisdom for our fans that are watching at home?

Tobin: No, just … you know, be true to yourself, have fun. Do what you love. Find your passion, own it, and don’t let anybody tell you different. And don’t be a dick. I mean, everyone’s gonna have dickish moments, it’s just life. As long as you recognize, “man, I was a dick last night I’m really sorry,” because I’ve had to do that before you know? Tequila.

Tobin: You own it, yeah, yeah.

Rei: That’s a difference. All right, thank you so much for spending some time with us.

Tobin: Right on. Thank you.

Rei: And I hope you have a great rest of your festival.

Tobin: Yes, thank you, Rei. I will. We’re gonna get this party started.

Rei: Wait, did we do the liner? Did we? Yes, no? Oh, we didn’t. Can we get you to say again who you are and what you do, and that you’re listening to Crim Radio?

Rei: That is the best thing I’ve heard all day.