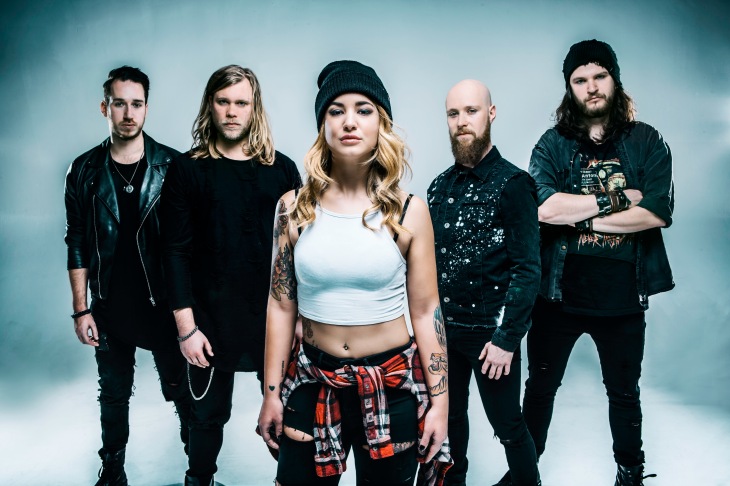 Fuel the Scene Magazine’s Rei Haycraft got a chance to hang out with Lucas Arnoldussen (Bass) and Martijn Slegtenhorst (Guitars) of Amsterdam’s THE CHARM THE FURY after their set at Monster Energy’s Welcome to Rockville in Jacksonville, FL, the first of the band’s three US festival appearances to chat about the band, their new album, “The Sick, Dumb & Happy,” the inspiration behind their writing, and their thoughts on the current state of the world.

Rei: We’re here at Welcome to Rockville, with The Charm The Fury. Can you all introduce yourselves and what you paly for our viewers back home?

Lucas: Of course. Hi. I’m Lucas. I’m the bass player of the band.

Rei: And these guys came from Amsterdam in The Netherlands. This is your first U.S. festival tour, correct?

Lucas: It is, yeah. This was our proper first U.S. show actually, yeah. We did some in L.A., but that was for business people, so that wasn’t really a show.

Rei: This is the first with a real crowd and seeing the crowd participation.

Lucas: Exactly. Which was great.

Rei: I was in the pit. I was right up there. And I’ve had Echoes stuck in my head since. So, thank you for that.

Martijn: That’s exactly what should happen.

Lucas: Someone broke his knee during our show.

Rei: Are you serious?

Lucas: Maybe you did it.

So, for this being your first, I guess, reception into this scene for this record, what has the reception been like?

Lucas: It’s been great. Well, some mixed reaction because it’s really different to our previous work. It used to be proper metal core. And nowadays I think we’re just a metal band. We were influenced by bands like Pantera, Metallica, Slipknot—like the huge bands that are still around. And we try to mingle that with our own sound and just create a new sound for ourselves.

Rei: I think you did a great job of doing that. We’ve been spinning your new album pretty nonstop since we got it.

Rei: I think it’s fantastic. And I love the dynamics of it. So, the range. And I think that’s what you’re talking about, like it’s not sticking just to metal core. It’s like a spectrum of metal.

Martijn: Oh, wow. That’s a good way to describe it.

Lucas: A spectrum of metal. Yeah, we just wanted to celebrate metal.

Martijn: Yeah, that’s what it is.

Lucas: That’s what we wanted to do with it exactly.

Rei: And it’s very anthemic, so some people are calling it an angry record. What would you say to that?

Lucas: Well, I think it’s angrier than our previous one. But we’re not angry people. So, as you maybe could tell-

Rei: You could tell that. You look so happy on stage.

Lucas: Yeah. Well yeah, it’s metal music, so it obviously is angry in it. So the subjects we cover are not so positive, obviously. But I think there’s some anthemic stuff, some sing-along stuff. So yeah, it’s not at all totally angry record.

Martijn: It’s always a good thing to channel your frustration and anger in music. Well, you get to be happy afterwards, so that’s what we do.

Rei: Can you talk a little bit about the back story behind Echoes? I know it’s a little bit politically charges and you did it in response to …

Lucas: Well, it’s actually the way media takes its part in our whole lives, like the way the media breaks news, that’s just how people will see it. They can’t see it for themselves, so they have to rely on media to bring the news to them. But that news is, most of the time, so biased. So yeah, you can watch Fox News, or you can watch some other channel, and the channels will be totally different.

Rei: Yeah, absolutely. Tell me a little bit about the music videos. The three that I’ve seen are completely different, and I’m a huge film nerd so I love it.

Rei: I love it. I think Down on the Ropes was … I’m still a little disturbed by the bugs, that was a little cringy. So, what was that experience like filming those?

Martijn: Down on the Ropes was the coldest day of the year in Ireland. We started outside, and the day was like … We had a shooting day of like 20 hours. So we were completely frozen. So, to us personally, that was hard core. But it was really cool working with that team because we really wanna make something of a movie type of vibe with it.

Lucas: Yeah, like a bad ’80s movie. That was the vibe we were going for. And I think we pulled that off, I hope. But that day was the worst.

Lucas: We were at a scrapyard, and we had actually 20 people participating in the video. But there were no heated rooms at all. And we had to stand there in the cold.

Rei: That doesn’t come across at all. It doesn’t look uncomfortable.

Lucas: Well, it was.

Martijn: It really was. It was really bad.

Rei: And so, what about the other ones? They have very different feels, each of the videos.

Lucas: The other two videos are shot by the same guy and we work with them a lot. Yeah, I think our last video was Blood and Salt. And we actually had three days to figure that video out.

Martijn: [The director] is really good. He definitely saved our ass there.

Lucas: And the other video for Echoes, he actually isn’t in it. He wasn’t in the band back then. We just had one guitar player. So we shot that video almost three years ago. And we didn’t release it for years because the record wasn’t done yet. So we had to wait, and it was a bit awkward because there’s a guitar player short. But I think no one actually noticed.

Martijn: Only very few people did. I kind of like it. I was like, “Yeah, this is how important my role in the band is. Thank you so much. It’s all right.”

Rei:  We have the technology, we can superimpose you in there now. There we go.

Martijn: Let’s not do that.

Rei: What do you hope that listeners take away from your album?

Lucas: I mostly hope they will just enjoy it. I don’t think … We have some kind of message, but it’s not the most important that people will get it or something. I hope that they will mainly enjoy the music. And if they get the message, if we plant some ideas in their head that’s great. But it’s not our goal or something.

Martijn: No. There are definitely some political and personal issues on the lyrical end of it, but this record is all about just a celebration for metal and enjoying a metal record, and trying to create a record that you can listen over and over again for years to come. That was the idea.

Rei: Well, mission accomplished because even on the way here we listened to the album at least three or four times, discovering something new each time. Caroline’s vocal prowess is unmatched, it’s amazing.

Lucas: Really? That’s great. Actually, I think anyone can do that with the right training and everything like that. Even every women can scream like that.

Rei: I can do it for little bits, but not nearly as long.

Lucas: Yeah, she still has vocal lessons and stuff like that. So, she needs to keep it up as well. But I think everyone could do it if they try hard enough.

Martijn: But it’s hard work. And she definitely put a lot of effort into practice—every day, every morning, every night. We get to hear them every day.

Lucas: That’s so annoying. Before the show, after the show, before she goes to sleep, after she wakes up.

Martijn: Immediately when she wakes up. Jesus.

Rei: It’s a good habit to get into.

Martijn: I encourage it. Do it.

Rei: Based on the subject matter that you all cover, what do you think that the social media of today’s day in age, the effect that it has on bands? How do you feel it affects the music?

Lucas: A lot. It’s just your main door to the world, I think. It used to be selling records and maybe do some side sessions in record stores. And now you just do a post on Facebook and you’ll reach thousands of people, and they can share it and it can go viral. So, I think social media is a great outlet for bands. But it’s also hard to get your face out there because everyone does it, obviously. And the Facebook feed gets full very fast. No one will scroll down to find you. So to get out there you need to pay for advertisements. That sucks, but yeah, you need to do it.

Rei: Since you talk so much about getting down into the roots of metal, do you feel like technology has any effect on metal at this point?

Lucas: Definitely has. Like recording has become so easy now. Everyone can make a record in his bedroom. You need gear for $100 bucks and you’re ready to go. So yeah, that changed a lot.

Martijn: That in itself is also a challenge for metal, as well, because there are a shit ton more records right now than there were 20 years ago. And I guess it’s always a good thing to have a big team in on your music and people reflecting on it, just getting deeper and deeper into it, putting more energy into it. And, personally, I don’t believe that if you make a record just in your bedroom you’re gonna get that amount of feedback and energy into it as this record has. It’s different quality in that sense, in my opinion.

Lucas: Mainly, I think it’s a good thing we have the technology now to do it.

Rei: It’s just how you use it.

Rei: All right. Do you have any other words of wisdom for our viewers or something you want them to know about The Charm The Fury?

Lucas: I’m not sure. Wisdom is hard to be found in our band. We mostly are stupid ideas.

Martijn: Yeah, we don’t pretend to have any form of wisdom at all.

Lucas: But drink a lot.

Lucas: That saves your life. It will. Just don’t drive. Drink a lot, that’s great. Don’t vote for Trump anymore please, don’t do it.

Lucas: We had to wait in line. The customs line was longer than the actual flight. Now, that’s not true, but it felt like it.

Rei: I apologize on behalf of all Americans, because most of us don’t agree.

Lucas: No, I don’t think anyone that comes to this festival actually agrees.

Lucas: Yeah, hardly any. For so long in Europe we thought, “This has got to be a joke. This guy, this isn’t serious, right.”

Rei: Don’t worry, we thought so too.

Lucas: Yeah. And now it’s real. It’s so weird. It was the weirdest. I follow your elections. I watched it because it’s important to us as well. And it was like 3:00 at night, and then it was, “Yeah, Trump is winning. He’s winning. Oh, fuck that shit. I’m going to sleep. I don’t want to witness this.” Good job guys, well done.

Lucas: We will… if we’re allowed to.

Rei: We’ll smuggle you in, don’t worry about it.

Rei: All right. So, thank you again so much for taking the time to talk to us. Have a great rest of your U.S. tour, and we hope that you come back soon.