The World’s Loudest Month kicked off in spectacular fashion on April 29th and 30th with the Welcome to Rockville Festival in Jacksonville, Florida and their sister festival Fort Rock in Fort Myers, FL, boasting a record-breaking weekend with over 75,000 music fans over the two sites. Fuel The Scene Magazine was on-site a Welcome to Rockville, conducting interviews, photographing the bands, and generally enjoying the perfect rock atmosphere created by the festival.

Saturday started off with a running, headbanging start with Badflower, Al That Remains, and Dutch metal band The Charm The Fury. The European influence was abundant all day, including Sweden’s In Flames, England’s Dinosaur Pile-Up and Frank Carter and the Rattlesnakes.

The energy didn’t wane as the day went on, the energetic crowd headbanging, moshing, crowd-surfing to The Pretty Reckless, Coheed And Cambria, Mastodon, Pierce The Veil, and some classic punk rock goodness with The Offspring. 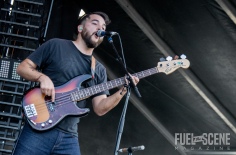 As the sun went down and the temperatures dropped, A Perfect Circle took the stage in a mysterious and disappointingly dark show. For the entirety of their set, A Perfect Circle kept the lights down, putting Maynard on a small riser at the back of the stage and keeping the rest of the members enshrouded by shadows and fog. This choice may have worked well for a headlining tour, but for a festival crowd that struggled to see from a distance, the set was a let down that was neither outstanding visually or sonically.

In stark contrast, Soundgarden brought the day to a perfect close with a 13 song set that was full of color, emotion, energy, and showcased Cornell’s immortal, iconic voice. The crowd was utterly spellbound from the opening notes of “Spoonman” to the fade out of “Beyond the Wheel.” 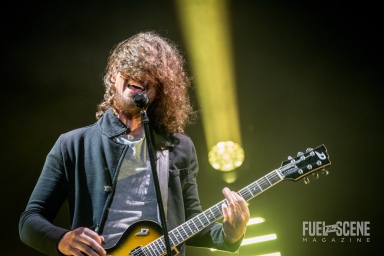 On Sunday, Queens, New York based Sylar and Austin, Texas’ Fire from the Gods opened the show with their rap infused metal. But this day belonged to dynamic lead vocalists, as Jonny Hawkins of Nothing More, Jay Buchanan of Rival Sons, and Chris Cerulli of Motionless in White engorged the crowd with their dynamic ranges and each one left the stage drained of every ounce of energy.

In This Moment and Motionless In White put on incredibly detailed, theatric performances of non-stop energy, fake blood, and costume changes. Chris Motionless was in perfect vocal form, never missing a beat despite the intense movement, stage antics, and heat.

Both Of Mice and Men and Three Days Grace showcased new vocalists (Aaron Pauley and Matt Waist, respectively) and showed the crowd that they were stronger, tighter, and more badass than ever.

Chevelle and Def Leppard closed out the weekend—overlapping a little too much for some fans’ liking, as Def Leppard started 10 minutes ahead of schedule, causing fans to swarm from one stage to the other. Def Leppard put on a hell of a show featuring 15 songs from across their entire catalog of hits.

In addition to the eclectic mix of new and old rock and metal, fans were treated to gourmet food and ice cold beverages compliments of Jack Daniels, Monster Energy, Bud Light and an impressive array of local and national food trucks. Beyond the concerts and food options, fans also had the opportunity to meet some of their music heroes and snag a coveted autograph at The Music Experience and FYE tents. Welcome to Rockville was the perfect start to one of the best Loudest Month lineups and will definitely bring us back in the coming years.