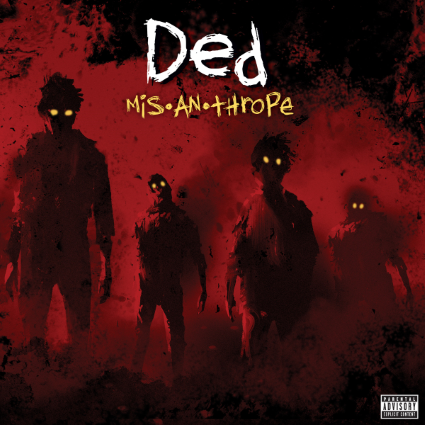 Hardcore was founded as an unabashedly angry genre of music. It was a bunch of people getting together and screaming at their microphones, featuring bands like Hatebreed and Converge (depending on who you ask). Phoenix natives Ded launch a new album today, Mis-An-Thrope, and it is a solid belt notch on the list of hardcore albums that you should be listening to. Fair warning, there is a small degree of language here where song lyrics are quoted.

“Architect” starts out the album with an aggressive riff and scream. One of the trademarks of hardcore has always been a kind of harsh, energizing sound that makes the listener want to get up and move. This song definitely has that, motivating you to get out of your seat and throw down (this is not an endorsement to crowd-kill). The next track, “Anti-Everything”, combines hardcore yells, melodic vocals, and riffs with rapped verses mixed in with the rest of the song. An angry declaration, this song is also one that is easy to learn and sing along to. One can expect it to be a fan favorite while they’re on a tour, and would adapt easily to having the audience sing entire parts of it. “Dead To Me” is next, and while it doesn’t stylize the word “dead” like the band’s name does, it features a lot of auditory signatures that Ded uses, including their killer riffs, and Joe Cotela’s signature screams and growls. Matt Reinhard kills it on drums on this song, with a riveting drumbeat that seethes around the lyrics and breakdowns. 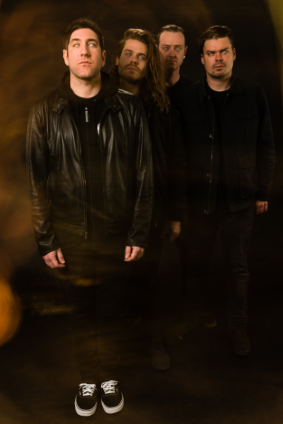 “FMFY” opens with a rhythmic static sound before launching right into a brutal riff and the namesake line of the song, “Fuck me and fuck you too”. At this point in the album, it would not be inappropriate to compare their sound to early Hatebreed, though they have perhaps more melodic vocals, and blend in rap vocals in a way that is not dissimilar to some of Linkin Park’s early work. “Remember the Enemy” is one such track, blending rapped verses and soft backing tracks with heavier screamed vocals and hardcore riffs. “Dissassociate” follows in this vein, while “Rope” is more of a hybrid of styles and techniques introduced by Korn’s vocalist with the hardcore genre. It works very well, blended into songs that are both inventive and catchy.

The song “I Exist” almost stands out a little. It is very reminiscent of Ill Nino, which is not a bad thing. This song has a more nu-metal vibe than other parts of the album, while retaining its hardcore pedigree. In fact, it would not be incorrect to say that Joe’s melodic vocals are similar to Ill Nino’s sung parts. “I Exist” is a brilliant and vocal defiance of people who try to erase others. “Hate Me” is another fantastic self declaration, inviting people to hate the singer because “I will never be a motherfucker like you”. Self definition is a recurring theme on this album, which draws another parallel to hardcore legends Hatebreed. These comparisons are only compliments to Ded, however, not something bad about this album.

Mis-An-Thrope closes with the songs “Inside” and “Beautiful”. These two songs focus on the aspects of one’s self more than others and their reactions to that self. “Inside” declares that the singer “feels nothing but dead inside” before launching into a mixture of nu-metal rap verses and hardcore riffs and screams. “Beautiful” is about the singer’s hate towards others because they are beautiful. It focuses on the singer’s feeling of having nothing to give and living in “your shadow, life in the gallows”. It is a grim portrait of self loathing, and gives the album a soft closing.

Mis-An-Thrope pays homage to legends of two huge genres, and that’s not a bad thing. It has callbacks to nu-metal while remaining decidedly in the hardcore genre. Well-mastered and powerfully written, it also bears a lot in common with the self-improvement and self-definitive declarations of Hatebreed’s music. Ded is a powerful and moving band, and you would be missing out if you skip their new album, Mis-An-Thrope.

Go buy it on iTunes today!