Review and photography by William Dibble

Anti Flag is currently on tour as part of their “Silence = Violence” tour with Stray From the Path, White Noise, and Sharptooth. The Denver, CO stop at Summit Music Hall was expanded into a local “Punk Against Trump” music festival. We previously covered the venue in our review of Arch Enemy/Trivium’s show. It turns out, they have excellent calzones, too, but that’s not what the focus of this review is.

“Punk Against Trump” was a concert combined with miniature activism event. There were several organizations present for a variety of causes. PETA2 was present to talk about veganism. A group called Defend J20 was there to push for support for activists arrested at the Washington, DC march exactly a year before the concert. ProgressNow Colorado was present, a group that defends and advocates for reproductive rights for people who can carry pregnancies. Sea Shepherd was present to talk about saving whales and ocean wildlife. A Voice for the Innocent is a community of support for victims of rape and sexual abuse. And Get On the List is an organization that gathers donations of blood stem cells and bone marrow for patients in need. And a portion of every concert ticket sold raised money for the Colorado Immigrant Rights Coalition. A total of $3634 was raised. (Each organization name is a link to their website). 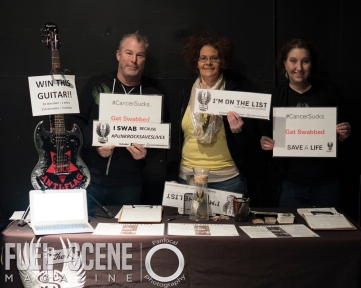 In our previous review here, we mentioned that Summit Music Hall maintains two stages. Today, they had both in full operation. The concert kicked off with Rotten Reputation, a Denver-based punk rock band. Full of spunk and good old-fashioned punk vibes, they put on a heck of a show despite being given the smaller stage in the venue. The singer’s arm tattoo reads “Fight Like a Girl” with an angry rabbit-like creature holding a large amount of weapons, and she certainly exemplifies this.

The bands throughout the afternoon and evening alternated between the smaller secondary stage and the main stage. Frequently, there was only five to ten minutes between the earlier bands in the day. Rotten Reputation, for example, played from 4:00pm to about 4:25pm, and the next band was scheduled on the main stage at 4:35pm. 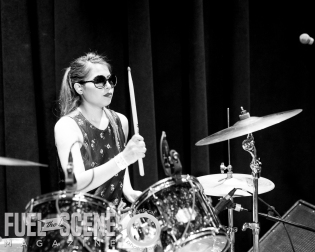 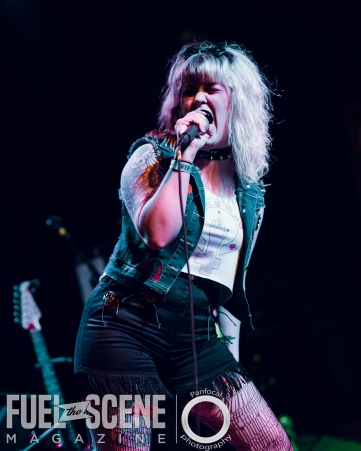 Denver hardcore band Line Brawl was the first band to take the main stage. Energetic and angry, Line Brawl put on a heck of a show, dominating the entirety of the space given to them. They jumped, they ran, they made full use of every square inch and minute. 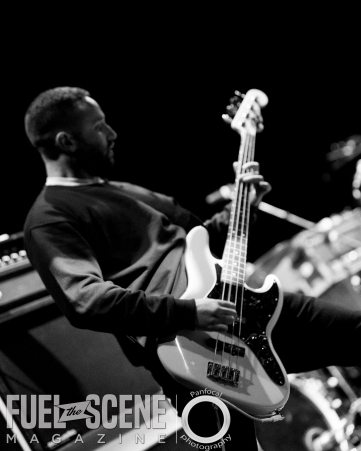 The New Narrative is another Colorado native, a fast and pure punk. They brought along a poster with an adorable seal on it, “the seal of approval.” They implored their fans to sign off on it and pass it around. Later, it settled at their merch booth. The band members wore shirts with what was presumably their names and short, slightly comedic descriptions. It would be difficult to find bands with as much energy as any of the bands at this show, and based on the political statements, it is definitely probable that some of that energy comes from the political climate. 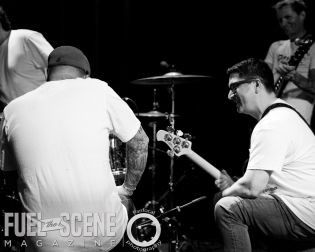 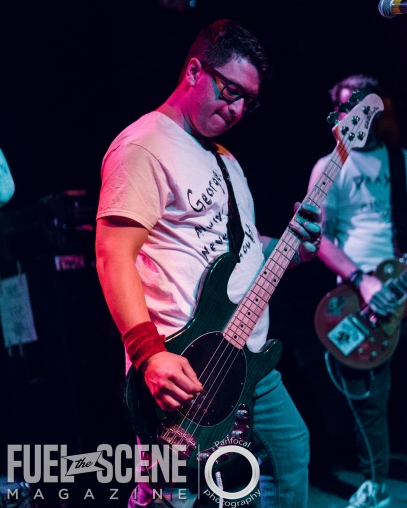 Baltimore-based Sharptooth, and the first band from the national tour to play, took center stage. Sharing a brief moment before the show together, they stormed the stage like only a seasoned band can do. Sharptooth combines blistering hardcore with political and social commentary, interspersing politically charged songs with meaningful words on problems. Between the blasting drum beats, Lauren’s screamed vocals, and the masterful guitars, Sharptooth is a band to pay attention to in the hardcore genre, or in heavy music at all. Sharptooth is currently touring in support of their debut album, Clever Girl, which is available now on most music retail platforms.
Editor’s Note: I don’t like to speak in the first person in reviews, but I think it is also very important to note that Sharptooth spoke to me on a personal level. Lauren spoke on the importance of intersectionality, including people of color, and trans/non-binary individuals in conversations. Frequently, as a non-binary individual, I feel left out, so this meant a lot to me as an individual.

Allout Helter played up on the secondary stage just moments later. Allout Helter offers a fast, accessible blend of hardcore and thrash. The band was flanked by a pair of femme individuals holding “RESIST” posters. While not the final band playing on the smaller stage, Allout Helter was definitely one of the highlights of the afternoon. 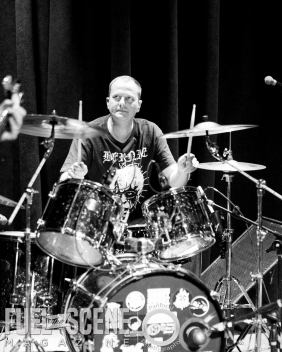 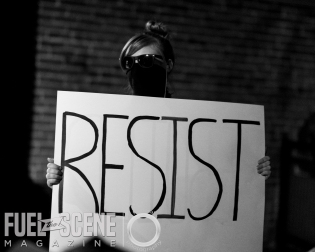 The next touring band, The White Noise, exploded onto the stage from the beginning. They traveled all the way from Los Angeles, CA, to be on this tour, and they were having fun doing it. Like Sharptooth, they are a played-straight hardcore band with serious talent. The singer, super energetic, was constantly moving around, and at several points, stood on the barriers around the photographer’s pit, and even sang from the crowd itself. At one point, he climbed up onto the outside rails of a stairway to the second floor of the venue, finishing a song from there before returning to the stage. He made sure to let everyone know that everybody, of all genders, races, and backgrounds, was welcome. Well, except for Nazis. They were not welcome.

Cheap Perfume had a more traditional punk-rock sound than the last few hardcore bands. The singer, donning a one-piece bathing suit for their set, made everything about her words and her band’s set an act of rebellion. From their strong political messages to a killer cover of “Bad Reputation”, they very much gave off Joan Jett and the Blackhearts vibes throughout the set. 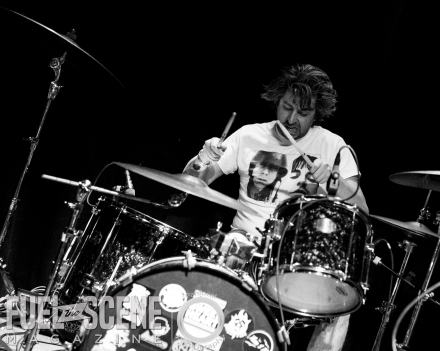 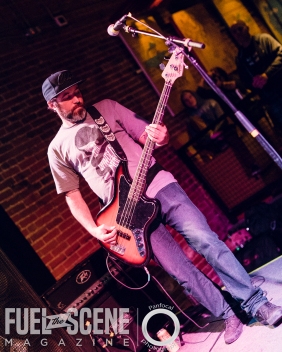 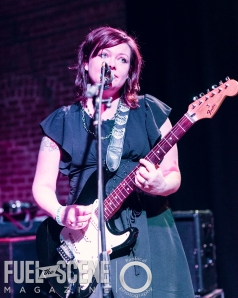 Hardcore genre veterans Stray From the Path were up next. They are from the opposite end of the country from The White Noise, and they, as always, brought a stage full of anger and power. At this point, the venue was nearly at capacity, and the crowd went wild for them. During their song, “Goodnight Alt Right”, water bottles and even people were flying back and forth through the main pit. They led a stunning and powerful set, which set the crowd up for the main act of the night. 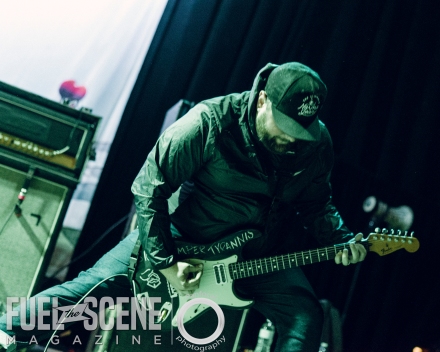 Before the headliner played, though, one last local band got to show their skills on the secondary stage. Hardcore band Over Time is fast, frenetic, and angry. Their singer vocally and loudly makes his views on the United States Presidency clear as they smashed their way through their evening set. The area around the second stage, while spacious at the opening of the day, was now crowded and tight. Finding a good spot to watch and listen proved difficult.

The final band of the night was Anti-Flag. Long-time survivors of punk rock, the long-running protest punk band opened with their brand new song, “When the Wall Falls”. Anti-Flag has been speaking and protesting for as long as they’ve been a band. They performed several songs in protest a year prior to this show at the inauguration, and they made it clear that night that they believed the President and his administration belonged in prison, not in office. It was also clear that the audience full-heartedly agreed with them. Their powerful, energetic set was the perfect closing for a day full of top-notch punk and hardcore. 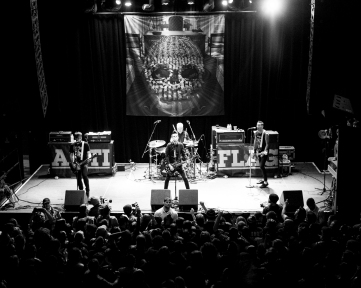 The tour still has many stops remaining. You should get your tickets now, get them today, and go see it when it comes near you. You can also see our full set of photographs from the concert here (PG-13 NSFW/nudity warning)!