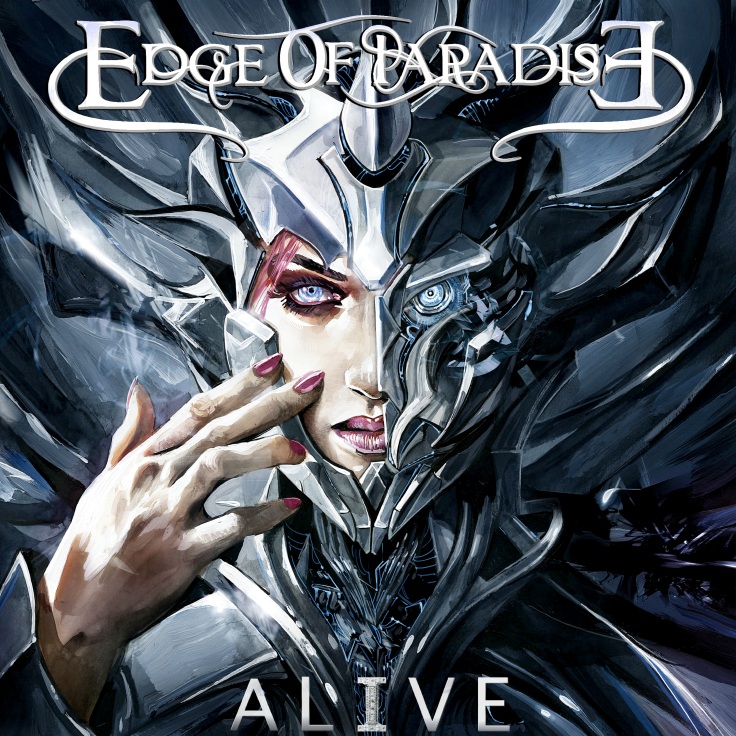 Hard-rock outfit Edge of Paradise hails from Los Angeles, California. Their new album, Alive, marks what will be their sixth year of playing as a group. They’ve done several tours, and stopped several times in North Carolina along the way. Alive measures in at five tracks and a bit under twenty minutes long, with a striking album art featuring a person encased in armor.

The song starts out with “Alive”, a heavy track that pairs well with Margarita’s strong, emphatic vocals. The rhythm and tone of this song tend to remind one somewhat of tracks and audio found in clubs, with an industrial sound to the drums and vocals. Its definitely a track that a person could dance to, with its rhythmic, repeated chorus, “I want to give myself to you.” The next track, “Dust to Dust” is a slower, heavier track more reminiscent of elements of the nu metal movement. If Edge of Paradise has done anything with this album, because it holds true in this song, it is to blend elements of industrial and metal masterfully to provide an album that a person can dance to. “Dust to Dust” mixes things up a little, though, throwing in a heavy breakdown toward the end of the song.

“Mystery” changes the formula a bit, bringing in a focus on piano and Margarita’s focus. For large parts of the song, the only sounds are her voice and the ethereal piano accompaniment. There are parts of the song, namely during the climax halfway through, where the vocals feel strained and forced. However, it is hard to say if this was intentionally done as part of the sound of the song, or attempting to sing out of range. Alive follows up “Mystery” with “Shade of Crazy”, shifting gears back to the industrial-metal sound persistent through the first two songs. It has a much faster tempo than the others, slowing down only for moments a few seconds long resuming its blistering speed. The final track opens with a drum solo, before taking a more subdued approach to the vocals. In this track, they almost take on a mocking tone, but it still maintains the industrial-esque dance overtones of the entire album.

Alive is expertly mixed and produced. There is no complaint to be had about the quality of the recording and mixing, as everything blends masterfully. There are parts where the guitar sounds very compressed, but this could also be stylistic. Overall, though, Alive is a solid EP, and a good third addition to Edge of Paradise’s discography.