On a humid September night, the walls of Newport Music Hall thrummed with music. Fozzy was here for the show, with several other bands supporting them. Live music is always an energizing experience, and with bands like these, it was bound to be an excellent evening. 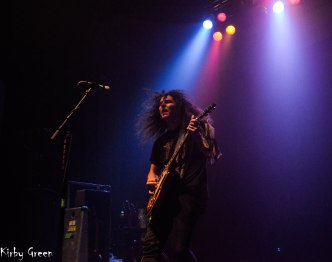 The opener was The Stir. Their live show was fantastic. There was no boring opener for the crowd to sit through, because The Stir had everybody up and moving from the start of the night. Between their killer guitar solos and their masterful use of bass, it is clear that The Stir has a big future ahead of them. Almost too soon, their set was over.

Stone Broken was there, too, on their first US tour. The UK-based band was full of energy, owning every square foot of the stage from start to finish of their set. Their supremely talented drummer, Robyn Haycock, was a blast to watch in action.

The audience was no stranger to Adelitas Way, the third band of the night. They were out for a good time, celebrating the fact that they had recently achieved a million subscribers on Spotify. This was a band with history with the crowd. The crowd knew almost every song, start to finish. It was no mystery, as Adelitas Way’s music had been used on WWE Programming multiple times. 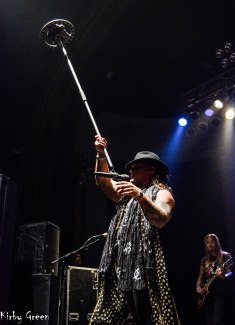 The WWE heritage didn’t end there, though. Fozzy is the brainchild of WWE wrestler Chris Jericho, and he brought every ounce of his bombastic WWE performance to the stage. The crowd was ready for this, cheering each member as they came out. Rich “The Duke” Ward brought his own brand of explosive energy to the show, moving around the stage enthusiastically. It didn’t slow them down one bit that bassist Pail Di Leo was not with them.

Newport Music Hall claims to be America’s longest-running rock music hall. With shows like this night’s, it is no wonder that they can make this claim. Fozzy, Adelitas Way, Stone Broken, and The Stir absolutely killed it that night. There will be more shows from these bands in the future, and you should make sure you’re not going to miss out!